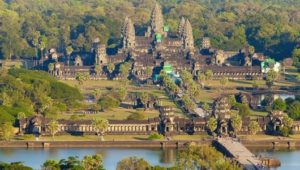 Angkor Wat is a vast stone temple at the heart of an ancient stone city. But at the ends of its corridors and the centres of its hidden rooms lie surprising Buddhist shrines still active in a place abandoned for hundreds of years. These Buddhist statues are imposters, hasty late additions to a religious building constructed to accommodate the myths and rituals of Hinduism.
They are splendid still, some draped incongruously in new and garish orange robes, the polyester glowing harsh against the cool, old stone.

They are alive, thriving on the centuries of mystical memory that make Angkor Wat one of the most fascinating and mysterious places on Earth. Among these ancient religious ruins there still exists a living, beating heart of spirituality that has survived almost 1,000 years. Imagine the incredible spiritual power that exists in such a place.

These days the revered King of Cambodia, for whose ancestors the ancient temples at Angkor were built, lives in his official residence right in the centre of Phnom Penh, the capital city of Cambodia. I often wonder if he thinks about what it would be like to live at that other place. Angkor Wat would be uninhabitable, of course, for any modern head of state. But its presence must play in the king’s heart and mind, reminding him that his was one of the greatest of the lost civilisations, and now still the largest standing stone religious structure in the world.

Angkor Wat was built over a 30 year period beginning in 1113. It was a royal palace, temple and eventually tomb for a god-king and the hundreds of women who attended him. The five famous lotus-bud towers still rise above the flattened landscape so characteristic of Cambodia, the central one containing the holiest of shrines once attended only by the King himself.
Though it was lost to the world for centuries, rumours of this great complex would pop up occasionally in Europe, principally in the accounts of Spanish and particularly Portuguese Catholic missionaries who would periodically stumble upon the place. Of course, when you go to Angkor Wat now you are more likely to see hundreds of Chinese and Korean tourists on package holidays. It is more than compensating for its centuries of obscurity.

It has tantalised the popular imagination, periodically slipping from the collective memory, only to be discovered and celebrated over again. Angkor Wat was once again “rediscovered” by the West in 1860 by French Protestant naturalist Henri Mouhot, who became its great publicist and created a vogue for Cambodia and for Angkor in particular. This rediscovery very nearly destroyed it by creating a market for the exquisite sculpture that was littered all through the jungle which covered the complex.

Writers and aristocratic travellers like Somerset Maugham and the eccentric Sitwells travelled to Angkor in the 1930s, 40s and 50s. Maugham thought that everyone should see Angkor once before they die. They were charmed by Angkor Wat and its surrounding reservoirs and canals. It reminded them of an oriental version of the Palace at Versailles, though it far surpassed Versailles in scale.

The temple has been plundered over the centuries, and much of its best statuary is now in collections all over the world, as well as in places like the National Museum of Cambodia – an astounding institution – probably one of the best in the world – in an exquisitely designed building. The grounds of the museum also house a University of Fine Arts and a College of Traditional Performing Arts. It is in this museum that you will see the best sculpture of the Angkor period. Cambodian religious art is simply the best in the world, the refined and beautiful Buddha heads becoming such iconic items that they are reproduced now in cement and resin and found in gardens and on coffee tables across the world. To come face to face with them in their original stone glory is really quite exceptional.

Angkor Wat was not constructed as a Buddhist temple. It represents an extraordinary moment in religious history where an ancient civilisation shifted from Hinduism to Mahayana Buddhism and later to the more deliberately primitive form of Theravada Buddhism, which it continues to practise today.

English Grammar in Use