Домой 3. Intermediate We seek out loyalty to social groups and are easily drawn to... 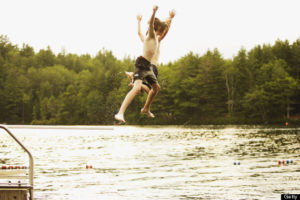 This classic 1950s social psychology experiment shined a light on the possible psychological basis of why social groups and countries find themselves embroiled in conflict with one another — and how they can learn to cooperate again.

Study leader Muzafer Sherif took two groups of 11 boys (all age 11) to Robbers Cave State Park in Oklahoma for “summer camp.” The groups (named the “Eagles” and the “Rattlers”) spent a week apart, having fun together and bonding, with no knowledge of the existence of the other group. When the two groups finally integrated, the boys started calling each other names, and when they started competing in various games, more conflict ensued and eventually the groups refused to eat together. In the next phase of the research, Sherif designed experiments to try to reconcile the boys by having them enjoy leisure activities together (which was unsuccessful) and then having them solve a problem together, which finally began to ease the conflict.