The Phaistos Disc (also spelled Phaistos Disk, Phaestos Disc) is a disk of fired clay from the Minoan palace of Phaistos on the island of Crete, possibly dating to the middle or late Minoan Bronze Age (second millennium B.C.). Now, the island of Crete is part of modern Greece. The disk is about 15 cm (5.9 in) in diameter and covered on both sides with a spiral of stamped symbols. Its purpose and meaning, and even its original geographical place of manufacture, remain disputed, making it one of the most famous mysteries of archaeology. This unique object is now on display at the archaeological museum of Heraklion.

The disc was discovered in 1908 by the Italian archaeologist Luigi Pernier in the Minoan palace-site of Phaistos, and features 241 tokens, comprising 45 distinct signs, which were apparently made by pressing hieroglyphic «seals» into a disc of soft clay, in a clockwise sequence spiraling toward the center of the disk.

The Phaistos Disc captured the imagination of amateur and professional archaeologists, and many attempts have been made to decipher the code behind the disc’s signs. While it is not clear that it is a script, most attempted decipherments assume that it is; most additionally assume a syllabary, others an alphabet or logography. Attempts at decipherment are generally thought to be unlikely to succeed unless more examples of the signs are found, as it is generally agreed that there is not enough context available for a meaningful analysis.

Although the Phaistos Disc is generally accepted as authentic by archaeologists, a few scholars believe that the disc is a forgery or a hoax. 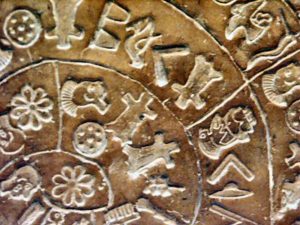 The Phaistos Disc was discovered in the Minoan palace-site of Phaistos, near Hagia Triada, on the south coast of Crete; specifically the disc was found in the basement of room 8 in building 101 of a group of buildings to the northeast of the main palace. This grouping of four rooms also served as a formal entry into the palace complex. Italian archaeologist Luigi Pernier recovered the intact «dish», about 15 cm (5.9 in) in diameter and uniformly slightly more than 1 centimetre (0.39 inches) in thickness, on 3 July 1908 during his excavation of the first Minoan palace.

It was found in the main cell of an underground «temple depository». These basement cells, only accessible from above, were neatly covered with a layer of fine plaster. Their content was poor in precious artifacts, but rich in black earth and ashes, mixed with burnt bovine bones. In the northern part of the main cell, in the same black layer, a few inches south-east of the disc and about 20 inches (51 centimetres) above the floor, Linear A tablet PH 1 was also found. The site apparently collapsed as a result of an earthquake, possibly linked with the eruption of the Santorini volcano that affected large parts of the Mediterranean region during the mid second millennium B.C.

The Phaistos Disc is generally accepted as authentic by archaeologists. The assumption of authenticity is based on the excavation records by Luigi Pernier. This assumption is supported by the later discovery of the Arkalochori Axewith similar but not identical glyphs.

The possibility that the disc is a 1908 forgery or hoax has been raised by two scholars. According to a report in The Times the date of manufacture has never been established by thermoluminescence. In his 2008 review, Robinson does not endorse the forgery arguments, but argues that «a thermoluminescence test for the Phaistos Disc is imperative. It will either confirm that new finds are worth hunting for, or it will stop scholars from wasting their effort.»

A gold signet ring from Knossos (the Mavro Spilio ring), found in 1926, contains a Linear A inscription developed in a field defined by a spiral—similar to the Phaistos Disc. A sealing found in 1955 shows the only known parallel to sign 21 (the “comb”) of the Phaistos disc. This is considered as evidence that the Phaistos Disc is a genuine Minoan artifact.

The strange case of Rudolph Fentz

english-teacher.moscow - 10.05.2017
0
The story: In 1950, a man with mutton chop sideburns and Victorian-era duds popped up in Times Square. Witnesses said he looked startled, and then...
© 2017-2020 Репетитор английского языка Новогиреево Москва
БОЛЬШЕ ИСТОРИЙ