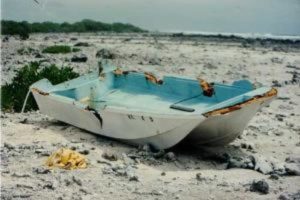 On February 19, 1979, five men from the Hawaiian island of Maui – Benjamin Kalama, Ralph Malaiakini, Scott Moorman, Patrick Woesner, and Peter Hanchett—went on a fishing trip on a vessel called the “Sarah Joe”. The boat and its crew all vanished after a terrible storm hit the area. It would seem obvious that the five men probably got lost at sea and drowned, but things got really weird in 1988 when pieces of the “Sarah Joe” were found on an island over 2000 miles away.An unmarked shallow grave was also found on the island where the remains of Scott Moorman were buried under a pile of rocks.

However, no trace of the other four men was found, so if they were the ones who buried him, what happened to them afterward? And if they didn’t bury him, then who did? To make things even weirder, this island had apparently already been searched a couple years beforehand and no one found the pieces of the Sarah Joe or the grave at that time. The fate of the four other missing men and the mystery of how Scott Moorman was buried remains unsolved.