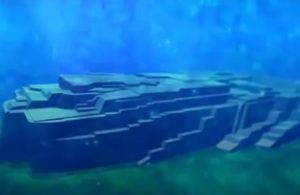 The Yonaguni Monument Remains one of the worlds biggest unexplained mysteries.

Yonaguni Island Submarine Topography is a massive underwater rock formation off the coast of Yonaguni, the southernmost of the Ryukyu Islands, in Japan. There is a debate about whether the site is completely natural, is a natural site that has been modified, or is a man-made artifact.

Many claim it may have been made by ancient aliens, thousands of years ago.

The underwater monument at is one of the clearest pieces of evidence of an advanced civilization at a time when mainstream archaeology says there was no advanced societies on Earth. The only other explanation can be aliens built it!

Of all the famous monuments in Japan, perhaps none is more perplexing than Yonaguni, an underwater rock formation that lies off the coast of the Ryuku Islands. It was discovered in 1987 by a group of divers who were there to observe Hammerhead sharks, and it immediately sparked a huge amount of debate in the scientific community: is the monument a natural formation, or is it man-made?

Scientists have long argued that millennia of strong currents and erosion have carved the formations out of the ocean floor, and they point to the fact that the monument is all one piece of solid rock as proof that it was not assembled by a builder. Others, though, point to the many straight edges, square corners and 90-degree angles of the formation as proof that it’s artificial.

They often cite one formation in particular, a section of rock that resembles a crude carving of a human face, as evidence. If they are right, then an even more interesting mystery presents itself: the monument had to have been built when it was last above sea-level… over 10,000 years ago!

english-teacher.moscow - 16.01.2020
0
The year is 2051. CONTROL, the government of Europe, keeps everyone happy in a virtual reality. This...
© 2017-2020 Репетитор английского языка Новогиреево Москва
БОЛЬШЕ ИСТОРИЙ