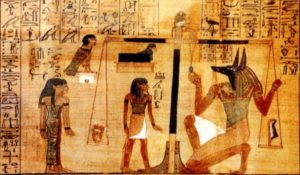 As well as the mummy cases, funerary statuettes, amulets and scarabs found in the pyramids, archaeologists also discovered “pyramid texts” provided for the use of the dead on their journey into the unknown. Written with reed pens on papyrus and often enclosed in wooden containers, or else inscribed on the walls of tombs or painted on the covers of coffins, these writings are known collectively as the Book of the Dead.

Whereas the household utensils unearthed in Egyptian tombs are essentially banal, these rich texts draw us deep into the realms of the unconscious, where we come face to face with the ancient world’s darkest, strangest, and most fearful imaginings.

Once mummification was completed and the mummy placed in the sarcophagus, a priest used an adze ritualistically to “open” the dead man’s mouth and enable his winged soul (ba) to enter and leave the mortal remains at will.

Missing pages of this famous book are still showing up in unexpected places.

The Egyptian Book of the Dead is one of the most famous books containing spells to be used in the afterlife. Rather than being a single book, it is more of a concept. The spells were usually written on the walls and on the bodies of the deceased. Upper class Egyptians were also given a papyrus scroll with the spells written on it, which would allow them to journey through the afterlife.??

Researchers have spent years trying to track down all the pieces of the Book of the Dead given to Amenhotep, a powerful Egyptian official from around 1400 BC. Nearly 100 fragments of this scroll were recently found – not in a sandy tomb, but in the basement of the Queensland Museum, where they were donated almost 100 years ago.