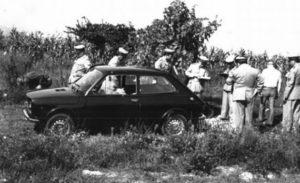 The Monster of Florence ( Mostro di Firenze ) was the name given to the serial killer who murdered 16 people, including seven young couples in the Florentine countryside between 1968 and 1985.

His method of killing was to sneak up on people making out in parked cars and shoot them.

The same gun (identified as a Beretta 22 caliber pistol loaded with Winchester series H bullets) was used in all the murders.

He also usually mutilated his female victims, sometimes cutting off their sexual organs.

Strangely, The Florence killer had very long breaks between attacks, usually a year and in one instance almost 7 years.

The identity of the killer was never discovered, yet 4 arrests would follow. 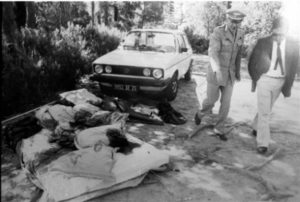 However, these convictions have been criticized and ridiculed in the media; critics suggest that the real killer or killers have never been identified.

Several other suspects were arrested and held in captivity at various times, but they were later released when subsequent murders using the same weapon and methods cast doubt on the guilt of the suspects held in captivity.

Despite the fact that the Italian authorities sought out the help of expert investigators, criminologists, psychologists, and sociologists from all over the world, the case has remained a puzzle with no solution to this day.

The modus operandi of the monster

The modus operandi of the monster was always the same. His victims were all couples who were alone – usually in a parked car – in isolated country areas in the night.

The attacker would wait for the couple to start getting intimate, this way their defences would be down and they would be less likely to notice what was going on outside the car.

The monster would then come out of the dark and ambush the man and woman, shooting both with a gun and then finishing off his work with a knife.

The crime would end with the attacker carrying out his ‘ritual’ of disfiguring the female victim’s body with a knife.

The crimes took place on moonless nights and on an evening when most people didn’t have to work the next day, either because it was a weekend or a holiday.

The attacker always switched area from one crime to the next, ambushing couples in a completely different part of the Florence suburbs. 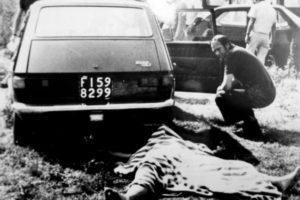 The dates of the crimes 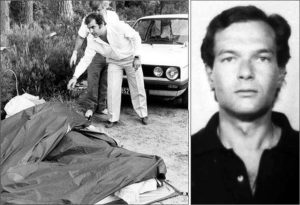 In the summer of 1982 the local police received a letter, Inside was a newspaper clipping with an article dating back to the summer of 1968 about two lovers who had been shot in a parked car in Lastra a Signa – a crime that Stefano Mele had been convicted of.

Someone had written on top of the clipping, ‘Why don’t you take another look at this case?’

And that’s what the police did.

The shells of the bullets from the 1968 murder were still attached to the archive, and ballistics tests soon proved that the same gun that had been used in 1968 was the very gun that had been terrorizing the hills around Florence since 1974.

The bullets were the same too, and not just the same type, but from the same box.

But if Stefano Mele had been in prison, who could have been committing these crimes with the same gun?

Another Envelope to the Police

Sometime in 1985 another letter arrived.

The address was written out as if a ransom note, with letters cut out of a magazine, and there was a spelling mistake, with the word ‘Repubblica’ misspelt, with only one ‘B’.

This gave the investigators another small piece of information to try to understand the type of person they were dealing with.

An uneducated person who did not know how to spell a very commonly seen word in Italian.

The envelope contained no letter or message though, but a macabre trophy from the Monster of Florence: a sliver of victim, Nadine Mauriot’s breast.

At the time, the authorities thought that this envelope sent directly by the maniac was a warning of more violent crimes to come.

The following picture is a mugshot of the Monster of Florence, The sketch was prepared right after the crime in 1981.

A person driving in the same country road where the killings took place saw a solitary and ‘slightly crazed’ looking man driving away. 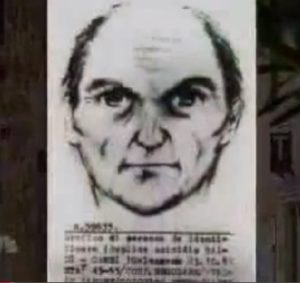