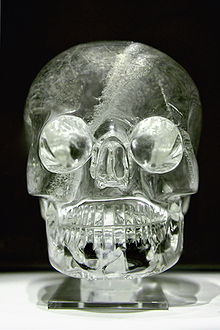 The crystal skulls are human skull hardstone carvings made of clear or milky white quartz, claimed to be pre-Columbian Mesoamerican artifacts by their alleged finders; however, none of the specimens made available for scientific study has been authenticated as pre-Columbian in origin.

The results of these studies demonstrated that those examined were manufactured in the mid-19th century or later, almost certainly in Europe during a time when interest in ancient culture was abundant. Despite some claims presented in an assortment of popularizing literature, legends of crystal skulls with mystical powers do not figure in genuine Mesoamerican or other Native American mythologies and spiritual accounts.

The skulls are often claimed to exhibit paranormal phenomena by some members of the New Age movement, and have often been portrayed as such in fiction. Crystal skulls have been a popular subject appearing in numerous sci-fi television series, novels, films, and video games.

Trade in fake pre-Columbian artifacts developed during the late 19th century to the extent that in 1886, Smithsonian archaeologist William Henry Holmes wrote an article called «The Trade in Spurious Mexican Antiquities» for Science. Although museums had acquired skulls earlier, it was Eugène Boban, an antiquities dealer who opened his shop in Paris in 1870, who is most associated with 19th-century museum collections of crystal skulls. Most of Boban’s collection, including three crystal skulls, was sold to the ethnographer Alphonse Pinart, who donated the collection to the Trocadéro Museum, which later became the Musée de l’Homme. 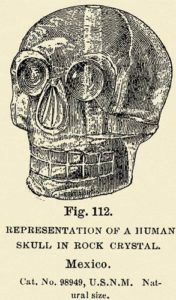 Many crystal skulls are claimed to be pre-Columbian, usually attributed to the Aztec or Maya civilizations. Mesoamerican art has numerous representations of skulls, but none of the skulls in museum collections come from documented excavations. Research carried out on several crystal skulls at the British Museum in 1967, 1996 and 2004 shows that the indented lines marking the teeth (for these skulls had no separate jawbone, unlike the Mitchell-Hedges skull) were carved using jeweler’s equipment (rotary tools) developed in the 19th century, making a supposed pre-Columbian origin problematic.

The type of crystal was determined by examination of chlorite inclusions. It is only found in Madagascar and Brazil, and thus unobtainable or unknown within pre-Columbian Mesoamerica. The study concluded that the skulls were crafted in the 19th century in Germany, quite likely at workshops in the town of Idar-Oberstein, which was renowned for crafting objects made from imported Brazilian quartz in the late 19th century.

In 1992, the Smithsonian Institution investigated a crystal skull provided by an anonymous source; the source claimed to have purchased it in Mexico City in 1960, and that it was of Aztec origin. The investigation concluded that this skull also was made recently. According to the Smithsonian, Boban acquired his crystal skulls from sources in Germany, aligning with conclusions made by the British Museum.

The Journal of Archaeological Science published a detailed study by the British Museum and the Smithsonian in May 2008. Using electron microscopy and X-ray crystallography, a team of British and American researchers found that the British Museum skull was worked with a harsh abrasive substance such as corundum or diamond, and shaped using a rotary disc tool made from some suitable metal. The Smithsonian specimen had been worked with a different abrasive, namely the silicon-carbon compound carborundum, which is a synthetic substance manufactured using modern industrial techniques. Since the synthesis of carborundum dates only to the 1890s and its wider availability to the 20th century, the researchers concluded that it was made in the 1950s or later.

None of the skulls in museums come from documented excavations. A parallel example is provided by obsidian mirrors, ritual objects widely depicted in Aztec art. Although a few surviving obsidian mirrors come from archaeological excavations, none of the Aztec-style obsidian mirrors are so documented. Yet most authorities on Aztec material culture consider the Aztec-style obsidian mirrors as authentic pre-Columbian objects. Archaeologist Michael E. Smith reports a non peer-reviewed find of a small crystal skull at an Aztec site in the Valley of Mexico. Crystal skulls have been described as «A fascinating example of artifacts that have made their way into museums with no scientific evidence to prove their rumored pre-Columbian origins. 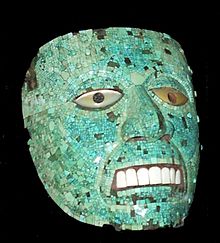 A similar case is the «Olmec-style» face mask in jade; hardstone carvings of a face in a mask form. Curators and scholars refer to these as «Olmec-style», as to date no example has been recovered in an archaeologically controlled Olmec context, although they appear Olmec in style. However they have been recovered from sites of other cultures, including one deliberately deposited in the ceremonial precinct of Tenochtitlan (Mexico City), which would presumably have been about 2,000 years old when the Aztecs buried it, suggesting these were as valued and collected as Roman antiquities were in Europe.