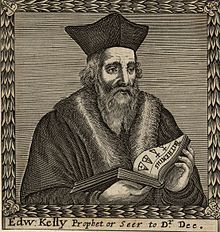 Sir Edward Kelley or Kelly, also known as Edward Talbot (1 August 1555 – 25 November 1597) was an English Renaissance occultist and self-declared spirit medium. He is best known for working with John Dee in his magical investigations. Besides the professed ability to summon spirits or angels in a mirror, which John Dee so valued, Kelley also claimed to possess the secret of transmuting base metals into gold, the goal of alchemy, as well as the supposed Philosopher’s Stone itself.

Legends began to surround Kelley shortly after his death. His flamboyant biography, his relationships with Queen Elizabeth I’s royal magus Sir John Dee and the Emperor Rudolf II, and his claims of great alchemical skill and the ability to communicate with angels have all led to his relative notoriety among historians. This has made him (along with the German Faustus and Sir John Dee himself) one source for the folklorical image of the alchemist-medium-charlatan.

Much of Kelley’s early life is obscure. He claimed descent from the family of Ui Maine in Ireland. He was born at Worcester on 1 August 1555, at 4 P.M. according to a horoscope that John Dee drew up (based on notes Dee kept in his almanac/diary). His sister Elizabeth was born in 1558, and he had a brother Thomas who later joined him in Dee’s household. However, much of Kelley’s life before meeting John Dee is not known. He may have studied at Oxford under the name of Talbot; whether or not he attended university, Kelly was educated and knew Latin and possibly some Greek by the time he met Dee.

Anthony Wood records in Athenae Oxoniensis that Kelley, «being about 17 years of age, at which time he attained to a competency of Grammar learning at Worcester and elsewhere, was sent to Oxford, but to what house I cannot tell. However, I have been informed by an ancient Bachelor of Divinity who in his younger years had been an Amanuensis to Mr Thomas Allen of Gloucester-hall, that he (Kelly) had spent some time in that House; whereupon I, recurring to the matriculation, could not find the name Kelly, only Talbot of Ireland, three of which name were students there in 1573, 74, &c… This relation being somewhat dubiously delivered to me, I must tell you that Kelly having an unsettled mind, left Oxford abruptly, without being entitled into the matricula.» According to some accounts, Kelley was pilloried in Lancaster for forgery or counterfeiting. Both his ears were supposedly cropped, a common punishment during the Tudor Dynasty. He usually wore a cap on his head, and it was thought this was to hide his lack of ears. John Weever says, «Kelly (otherwise called Talbot) that famous English alchemist of our times, who flying out of his own country (after he had lost both his ears at Lancaster) was entertained with Rudolf the second, and last of that Christian name, Emperor of Germany. Some accounts say that he first worked as an apothecary’s apprentice: some say he worked as a notary in London.

Kelley approached John Dee in 1582. Dee had already been trying to contact angels with the help of a crystal-gazer, but he had not been successful. Kelley professed the ability to do so, and impressed Dee with his first trial. Kelley became Dee’s regular medium. Dee and Kelley devoted huge amounts of time and energy to these «spiritual conferences». From 1582 to 1589, Kelley’s life was closely tied to Dee’s. In those seven years, they conducted conferences or seances, including «prayers for enlightenment… in the spirit of Dee’s ecumenical hopes that alchemy and angelic knowledge would heal the rift of Christendom». Dee also believed that the angels held knowledge that would aid the English in their discoveries of new and uncharted lands on Earth.

Kelley married a widow, Jane Cooper of Chipping Norton. He helped educate her two children: the girl, future poet Westonia, later described him as a ‘kind stepfather’ and noted how he took her in after the deaths of her two grandmothers. Kelley had also hired a Latin tutor for her.

About a year after entering into Dee’s service, Kelley appeared with an alchemical book (The Book of Dunstan) and a quantity of a red powder which, Kelley claimed, he and a certain John Blokley had been led to by a «spiritual creature» at Northwick Hill. (Accounts of Kelley’s finding the book and the powder in the ruins of Glastonbury Abbey were first published by Elias Ashmole, but are contradicted by Dee’s diaries.) With the powder (whose secret was presumably hidden in the book) Kelley believed he could prepare a red «tincture» which would allow him to transmute base metals into gold. He reportedly demonstrated its power a few times over the years, including in Bohemia where he and Dee resided for many years.

In 1583, Dee became acquainted with Prince Albert Łaski, a Polish nobleman interested in alchemy. In September of that year, Dee, Kelley, and their families left England with Łaski for the Continent. Dee sought the patronage of Emperor Rudolf II in Prague and King Stefan of Poland in Kraków; Dee apparently failed to impress either monarch enough to earn a permanent station. Dee and Kelley lived a nomadic life in Central Europe, meanwhile continuing their spiritual conferences. While Kelley was apparently more interested in alchemy, Dee seemed more interested in making contact with the angels. Kelley’s supposed value was as a medium, as only he was able to understand and scribe their language. According to those close to Dee (particularly his son Arthur) there was no little tension between the two men and their families as they journeyed through Europe. Some claim that «Dee seems to have driven Kelly to the brink of insanity, forcing him to perform long skrying sessions on a nearly daily basis».

Kelley and Dee’s involvement in necromancy eventually caught the attention of the Catholic Church, and on 27 March 1587 they were required to defend themselves in a hearing with the papal nuncio, Germanico Malaspina, bishop of San Severo. Dee handled the interview with tact, but Kelley is said to have infuriated the nuncio by stating that one of the problems with the Catholic Church is the «poor conduct of many of the priests.» The nuncio noted in a letter that he was tempted to toss Kelley out of the window (defenestration was a somewhat common tradition in Prague at the time).

In 1586, Kelley and Dee found the patronage of the wealthy Bohemian Lord William of Rosenberg, a senior official from a powerful family who also shared Kelley and Dee’s alchemical interests and is known to have participated in spiritual sessions with the two men. Kelley and Dee settled in the town of Třeboň and continued their research there, and according to Dee’s diary it was during this time that Kelley is said to have performed his first alchemical transmutation (on 19 December 1586). Kelley’s skilled draughtsmanship is evident in the notes taken by Dee during certain séances (these notes are available in Dee’s Book of Enoch). These notes show Kelley’s initial commitment to the alchemists’ mutual goal. However, he soon began to waver and expressed a desire to stop. Dee insisted that they continue. In 1587, possibly as an act to sever the sessions, Kelley revealed to Dee that the angels (namely a spirit «Madimi») had ordered them to share everything they had, including their wives. Dee, anguished by the «order» of the angels, subsequently broke off the spiritual conferences. He did, however, share his wife. This «cross-matching» occurred on 22 May 1587 and is noted in John Dee’s diary: “May 22nd, Mistris Kelly received the sacrament, and to me and my wife gave her hand in charity; and we rushed not from her». Nine months later, on 28 February, Dee’s wife Jane gave birth to a son, Theodorus Trebonianus Dee. Although there may have been speculation among the families that the child was actually Kelley’s, he was raised as Dee’s son; the «cross-matching» incident remained a secret (as did many of their activities) until after the post-mortem publication of Dee’s diaries; there was no controversy at the time.

Though it seems the two shared an intimate and often cooperative partnership, it was often characterised as «quarrelsome» and «tense» by contemporaries and historians. Also they were clearly involved in activities that could be seen as heretical to the Catholic Church of the time, so a certain amount of tact and secrecy was required. Kelly left Dee at Trebon in 1589, possibly to join the emperor’s court at Prague. Dee returned to England. They did not see each other again. 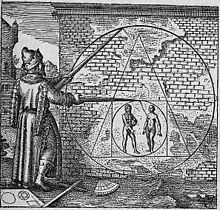 By 1590 Kelley was living an opulent lifestyle in Europe, enjoying the patronage of nobility: he received several estates and large sums of money from Rožmberk. Meanwhile, he continued his alchemical experiments until he had convinced Rudolph II that he was ready to start producing gold, the purpose of his work. Rudolf knighted him Sir Edward Kelley of Imany and New Lüben on 23 February 1590. In May 1591, Rudolf had Kelley arrested and imprisoned in the Křivoklát Castle outside Prague, supposedly for killing an official named Jiri Hunkler in a duel; it is possible that he also did not want Kelley to escape before he had actually produced any gold. In 1595, Kelly agreed to co-operate and return to his alchemical work; he was released and restored to his former status. When he failed to produce any gold, he was again imprisoned, this time in Hněvín Castle in Most. His wife and stepdaughter attempted to hire an imperial counselor who might free Kelley from imprisonment, but he died a prisoner in late 1597/early 1598 of injuries received while attempting to escape.

Kelley’s «angels» communicated to him in a special language called termed ‘Angelic’, subsequently called Enochian, which he then relayed to Dee. Some modern cryptographers argue that Kelley invented it. Some claim that this was all a farce, but are not clear whether Dee was a victim or an accomplice. Because of this precedent, and of a dubious connection between the Voynich Manuscript and John Dee (through Roger Bacon), Kelley has been suspected of having fabricated that book too, to swindle Rudolf.

The angelic language was supposedly dictated by angels whom Kelley claimed to see within a crystal ball or mirror. (Dee experimented in optics, so these tools were always handy). The angels were said to tap out letters on a complicated table, something like a crossword puzzle but with all the cells filled in. The first third were tapped out with each angelic word backwards; the following two-thirds with each word forwards. There are no significant errors or discrepancies in word usage between the first and following parts. The English translations were not tapped out but, according to Kelley, appeared on little strips of paper coming out of the angels’ mouths.

One argument against Kelley’s fabrication of angelic language is that the English translations are in a very different style of writing to that of Kelley’s own work. This raises the possibility that Kelley actually plagiarized material from a different source. However, no likely source material has ever surfaced.

Dee considered the dictation of angelic material highly important for three reasons. First, Dee believed the angelic represented a documentable case of true glossolalia, thereby «proving» that Kelley was actually speaking with angels and not from his imagination. Second, the angels claimed that their language was actually the original prototype of Hebrew: the language with which God spoke to Adam, and thus the first human word. Third, the angelic material takes the form of a set of conjurations that would summon an extremely powerful set of angelic beings who would reveal many secrets to those who sought them, especially the key to the philosopher’s stone, to god-like wisdom, and eternal life.

english-teacher.moscow - 20.11.2019
0
Three of Shakespeare's great tragedies are contained in this volume. Romeo and Juliet are in love, but...
© 2017-2020 Репетитор английского языка Новогиреево Москва
БОЛЬШЕ ИСТОРИЙ