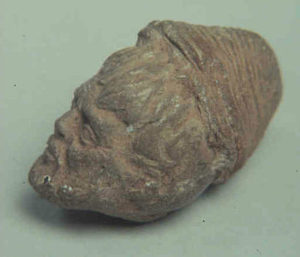 Because the head appears to be similar in style to artifacts of Roman origin, some believe that it is evidence of pre-Columbian trans-oceanic contact between Rome and the Americas, a view strongly promoted by archaeologist Romeo H. Hristov. However, several other explanations for its presence have also been put forward.

The object was discovered by archaeologist José García Payón during an excavation in 1933. It was a grave offering, found under three intact floors of a pyramidal structure. Along with the head were found a number of objects made of gold, copper, turquoise, rock crystal, jet, bone, shell and pottery. The burial was dated to between 1476 and 1510 AD. Payón did not publish information about the head itself until 1960.

An assessment of the case was made in 2001 by Romeo H. Hristov of University of New Mexico and Santiago Genovés T. of National Autonomous University of Mexico. This result clears up the doubts of Colonial manufacture of the artifact, and makes the hypothesis of Roman origin – among other possibilities – applicable. The identification of the head as Roman work from the II–III century A.D. has been further confirmed by Bernard Andreae, a director emeritus of the German Institute of Archaeology in Rome, Italy. According to Andreae «[the head] is without any doubt Roman, and the lab analysis has confirmed that it is ancient. The stylistic examination tells us more precisely that it is a Roman work from around the II century A.D., and the hairstyle and the shape of the beard present the typical traits of the Severian emperors period [193-235 A.D.], exactly in the ‘fashion’ of the epoch.»  On the other hand, an examination of the field notes of the archaeologist in charge of the excavation as well as the site itself have not revealed. 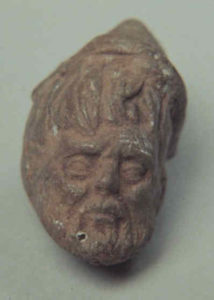 A thermoluminescence test performed in 1995 by P. Schaaf and G.A. Wagner in the FS Archäometrie unit in Heidelberg, Germany, established its age range to somewhere between the 9th century BC and the middle of the 13th century AD, confirming its pre-colonial provenance.

Bernard Andreae of the German Institute of Archaeology in Rome, Italy, who examined photographs of the artifact, stated that he believed that it was Roman and proposed the 2nd century AD as its date of origin, based on the hairstyle and the beard.

Researchers who have analyzed the artifact have come up with several possible explanations for the object’s presence at the site: