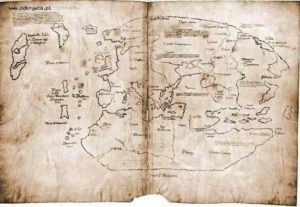 VINLAND refers to the southernmost region on the Atlantic coast of North America visited and named by Norse voyagers about a.d. 1000

In 1960, a Norse settlement was found at L’Anse aux Meadows, which is located on the northern tip of the island of Newfoundland, in what is now the Canadian province of Newfoundland and Labrador. The discovery provided evidence that the Vikings had entered sections of North America 500 years before Christopher Columbus. According to the Sagas of Icelanders, the great explorer Leif Ericson established a Norse settlement on North America named Vinland around the year 1000. Vinland is mentioned in the work of Adam of Bremen c. 1075 and in the Book of Icelanders compiled c. 1122 by Ari the Wise. According to the books, North America was sighted around 986 by Bjarni Herjolfsson, who was blown off course on a trip from Iceland to Greenland. His stories lured Leif Ericson to the area.

In 1957, news of the Vinland map was released to the world. The map is claimed to be a 15th-century world map that holds unique information about the Norse exploration of America. In addition to showing Africa, Asia, and Europe, the map depicts a landmass south-west of Greenland in the Atlantic Ocean labeled as Vinland. The discovery shocked historians who looked to explain the origin of the map. The parchment of the Vinland map shows a representative date of somewhere between 1423 and 1445. Since the map was found, some people have labeled it a forgery, while others have identified it as real.

In the late 1960s, it was announced that a chemical analyses of the map showed ink ingredients from the 20th-century. More specifically, the presence of anatase, which is a synthetic pigment used since the 1920s, however, natural anatase has been demonstrated in various Mediaeval manuscripts. The situation was made worse by the fact that the map was coated with an unknown substance in the 1950s, possibly created by nuclear tests on the document. To support claims for the map, it has been discovered that the wormholes match a medieval copy of volume 3 of Vincent of Beauvais’s encyclopedic Speculum historiale (“Historical Mirror”), which suggests that it may have been located in the book.

In a bizarre occurrence, the Vinland map depicts Greenland as an island with a remarkably close representation of the correct shape and orientation of the land. However, the depiction of Norway is wildly inaccurate. The map also shows an area that may represent Japan. It seems to not only show Honshu, but also Hokkaido and Sakhalin, which were omitted even from Oriental maps in the 15th century.

Many historians feel that the map might be a copy of one developed by Italian mariner Andrea Bianco in the 1430s. Some have placed the land of Vinland as far south as New England or Rhode Island. To date, the map is said to be real by its current owner, Yale University. Regardless of the controversy over its authenticity, the Vinland map has been valued at over $25,000,000. It might be the first map to show North America.

A thousand years ago, as Europe was emerging from what historians have called the “Dark Ages,” stories began circulating in Europe about a lush, abundant land far across the Atlantic called “Vinland” – the land of wine. For a long time scholars dismissed these stories as fanciful fables but then, in 1961, an indisputable Viking settlement was unearthed at L’Anse Aux Meadows in Newfoundland, Canada. It was true! The Vikings had been to America 500 years before Columbus “discovered” it. But L’Anse Aux Meadows is not a “land of wine”. So where was this idyllic Vinland where Europe first encountered America? 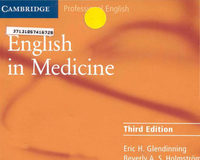 english-teacher.moscow - 06.03.2019
0
English in Medicine is a course for doctors, medical students and other medical professionals who need to...
© 2017-2020 Репетитор английского языка Новогиреево Москва
БОЛЬШЕ ИСТОРИЙ